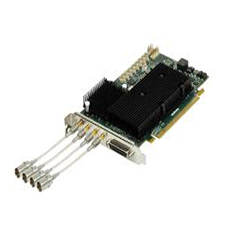 Matrox Orion HD is a high performance graphics and video capture board that supports standard and high definition video inputs and outputs including 1080p/60.

A PCIe® x16 host interface provides the Matrox Orion HD with the throughput necessary to handle the transfer of two HD video streams to host memory. With a peak bandwidth of up to 4 GB/s, the Matrox Orion HD’s host interface prevents video data from inadvertently being discarded while the point-to-point connectivity of PCIe® stops other add-in devices from consuming valuable bandwidth between the card and the host PC.

Matrox Imaging not only carefully selected each component in the Matrox Orion HD to ensure product availability in excess of five years, but also exercises strict change control to provide consistent supply. Longevity of stable supply lets OEMs achieve maximum return on the original investment without incurring the additional costs associated with the repeated validation due to constantlychanging products.

Complementing the Matrox Orion HD is the Matrox Imaging Library (MIL), which provides a comprehensive collection of software tools for developing industrial imaging applications. MIL features interactive software and programming functions for image capture, processing, analysis, annotation, display and archiving. These tools are designed to enhance productivity, thereby reducing the time and effort required to bring your solution to market. The MIL API is not only intuitive and straightforward to use but it is also portable. It allows applications to be easily moved from one supported video interface or operating system to another, which provides platform flexibility and protects the original development investment. Applications for the Matrox Orion HD can alternatively be developed using the DirectShow® API with an available MIL-based video capture filter.